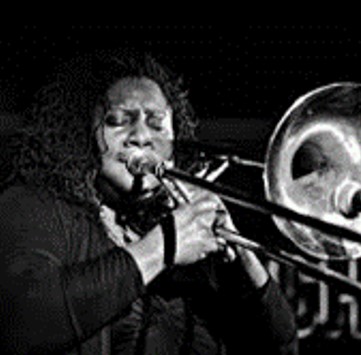 Hannabiell is a bass trombonist, an African hand percussionist, and a composer. She is a progressive music teacher who strives to teach her students different ways of using their voices to build and make unified communities through music. An African American Jamaican, originally from New Jersey-USA, she is currently living in Newcastle upon Tyne. She holds a BFA in Music from Mason Gros School for the Arts, Rutgers University and both a Masters and PhD in Music Performance from Newcastle University.
Hannabiell began her musical career as a trombone player, at the age of 9, in elementary school. Following graduation, Hannabiell went on to teach in the Trenton, NJ Public School System. After working with various communities in New Jersey, New York, and Connecticut, Hannabiell moved to Durban, South Africa, where she enrolled at University of Kwazulu-Natal. While in Durban she taught Drumming for African Music and Dance and Music Education. She also studied various music styles and instruments of that region.

As a bass trombonist, Hannabiell has performed with the The Drifters, New York City based Shelly Nicole’s Black Bush, Nobby Solano’s UK based salsa band The Geordie Latinos, salsa band Rumba Con Son, and the Harlem Symphony Orchestra. As a solo hand percussionist she has opened up for The Derrick Trucks Band, Stomp USA, and performed on two stages at South African music festival ‘Splashy Fen’. She has performed on stages such as The Sage Gateshead (UK), The Arc in Stockton(UK), the Apollo Theater in Harlem, NYC (USA), The Crossroads Theatre in New Jersey (USA) and many more. Hannabiell has also had the privilege of working as a freelance musician with the Kwazulu Natal Philharmonic Orchestra in Durban, South Africa, and is hired as the lead Conga player for various Salsa bands in the UK and the New York Metropolitan area. Hannabiell performed for the London 2012 Cultural Olympics in the BT River of Music Festival and for the Newcastle Upon Tyne’s Theatre Royal’s 175th Birthday Blaze. She was awarded ‘Performing Artist of the Year’ (2012) by the Journal Culture Awards, which celebrates the achievements of those involved in the arts and heritage in the North East of England.

Since moving to the North East of England, she has worked hard to recreate Hannabiell & Midnight Blue, a conscious band that is committed to playing music that aid in breaking down personal and cultural barriers. The band’s diverse membership is a direct reflection of its diverse fan base and audience attendance. Their performances never fail to convey the band’s passion for equality and social change. With her band Hannabiell & Midnight Blue she has performed in the US, South Africa and the UK. Through her music she aspires to bring communities together and break stereotypes. For Hannabiell, music is a means for breaking down personal and cultural barriers.